Blessed is He who comes in the name of the Lord! 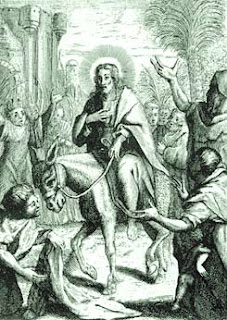 After telling a parable to the crowd at Jericho, Jesus went on ahead, going up to Jerusalem. When he had come near Bethphage and Bethany, at the place called the Mount of Olives, he sent two of the disciples, saying, "Go into the village ahead of you, and as you enter it you will find tied there a colt that has never been ridden. Untie it and bring it here. If anyone asks you, 'Why are you untying it?' just say this, 'The Lord needs it.'" So those who were sent departed and found it as he had told them. As they were untying the colt, its owners asked them, "Why are you untying the colt?" They said, "The Lord needs it." Then they brought it to Jesus; and after throwing their cloaks on the colt, they set Jesus on it. As he rode along, people kept spreading their cloaks on the road. As he was now approaching the path down from the Mount of Olives, the whole multitude of the disciples began to praise God joyfully with a loud voice for all the deeds of power that they had seen, saying,

"Blessed is the king
who comes in the name of the Lord!
Peace in heaven,
and glory in the highest heaven!"

FYI- An aspergillum is used on Palm Sunday and during Holy Week. This for Wikipedia tells about it:

An aspergillum (or aspergill) is a tool used to sprinkle holy water. It comes in two common forms: a brush that is dipped in the water and shaken, and a perforated ball at the end of a short handle. Some have internal reservoirs that dispense holy water when shaken, others rely on being dipped in an aspersorium (holy water bucket) periodically.

Aspergillus, a genus of mold, was named in 1729 by the Italian priest and biologist Pietro Antonio Micheli. When viewed under a microscope, the mold cells were said to resemble an aspergillum.

TO BECOME said…
My heart is so sad knowing what lay ahead of our Saviour at that time. He did it willing for us all. Thanks be to God for that One. connie from Texas 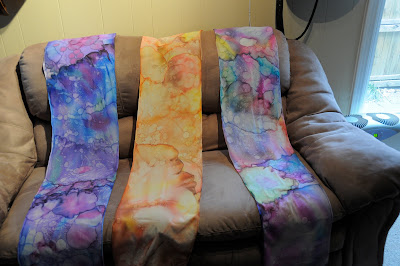 Painting Fabric with Sharpies and Alcohol